In late 2016, Manish Chauhan and Amiruddin Shah, two Navi Mumbai kids from poor families, secured scholarships to one of the world’s most prestigious ballet schools in the US, less than three years after they started learning the dance form. It’s an extraordinary true story. And in mid-2017, Sooni Taraporevala — best known for co-writing or writing the Mira Nair films, Salaam Bombay! and The Namesake — presented it in 360-degree video with the short documentary, Yeh Ballet. Now less than three years later, Taraporevala is back with an eponymous film on Netflix — it’s only her second directorial feature, in over a decade — that dramatises the boys’ fairy-tale journey. Think of it as Gully Boy, but for dance, or an Indian version of Billy Elliot.

Unfortunately, Yeh Ballet — “yeh” is Hindi for this is — is nowhere as brave as its protagonists. Writer-director Taraporevala delivers a by-the-numbers movie that hits the requisite beats of a slum-to-stardom template, including an obligatory moment where a disapproving parent is won over by their kid’s talent, without any special touches. The lack of courage is also evident from how the camera, in the hands of cinematographer Kartik Vijay (Manto), largely relies on a wide depth of field, which keeps nearly everything in focus. It left us with the feeling that Yeh Ballet doesn’t really know what it wants the audience to focus on. And a Bollywood pop track plays over the instrumental one in the film’s big ballet number, which is also sped up now and then. That shows the makers don’t have confidence in just the performance.

At the same time, the Netflix movie does a major disservice to its characters. Taraporevala writes in two female supporting members for the two ballet boys, but they have no arcs of their own and seem to exist only to propel, advise, and support the male leads. No wonder then that they appear and disappear as it fits the protagonists’ journey. But Yeh Ballet’s bigger crime is its handling of one of the two leads. Chauhan plays himself on the film, but that fact is not even acknowledged let alone depicted, even when it leaves you with a few lines at the end that inform you where its characters are in life today. Yeh Ballet is so focused on expanding upon a story several years old, that it’s blind to the better one that’s unfolding in front of its eyes. It would have also made it slightly meta, and feel more real.

Yeh Ballet opens by introducing Asif (Achintya Bose), a breakdancing enthusiast who braves the wrath of the fisherwomen as he lets loose in one of the rare free spaces amidst the Mumbai seaside slum that he calls home. Asif routinely invites trouble, including at home, where his uncle reprimands him for doing “non-Muslim activities”. “It’s haraam,” he barks. Thankfully, his parents (Danish Husain and Heeba Shah) are more approving. That’s not the case for talent show contestant Nishu (Chauhan), whose success draws a sharp rebuke from his father (Vijay Maurya): “Will a golden hat pay for your food?” Their worlds soon collide at a local dance academy, which has tapped the talents of a former great ballerino, Saul Aaron (Julian Sands), who’s best described as cantankerous.

And that’s where the problems begin. Even though Yeh Ballet is set in contemporary India, Saul’s arrival to the country — he’s Israeli by way of America — is depicted through such a stereotypical overdone “first-world white man is caught unaware by third-world happenings” lens that it comes across as something from the ‘80s or ‘90s. But Taraporevala’s failed attempts at comedy are just a fraction of the writing issues, even just with the ballet tutor. Yeh Ballet devotes time to Saul’s estranged relationship with his brother, which though interesting in concept, doesn’t add anything to the story and only serves to deviate from the story of the two Mumbai boys in practice. If the intention was to look at how Saul behaves in difficult situations, that’s achieved plenty elsewhere.

Speaking of repeating itself, Yeh Ballet includes two lines of dialogue for the price of one at times, telling the audience what they already know or have figured out for themselves. Elsewhere, the Netflix film flashbacks to scenes that had literally been shown less than 10 minutes ago, which is a level of idiot-proofing stemming from the assumption that its target audience has the attention span of a child. Yeh Ballet similarly dumbs itself down in explaining the communal strife that overwhelmingly affects Asif, which seems to suggest Taraporevala was afraid Netflix’s international audience might not understand what’s going on. There’s no need to do this when you’ve already communicated early on that less-privileged Muslims like Asif are more likely to be victims of hate crimes in India. 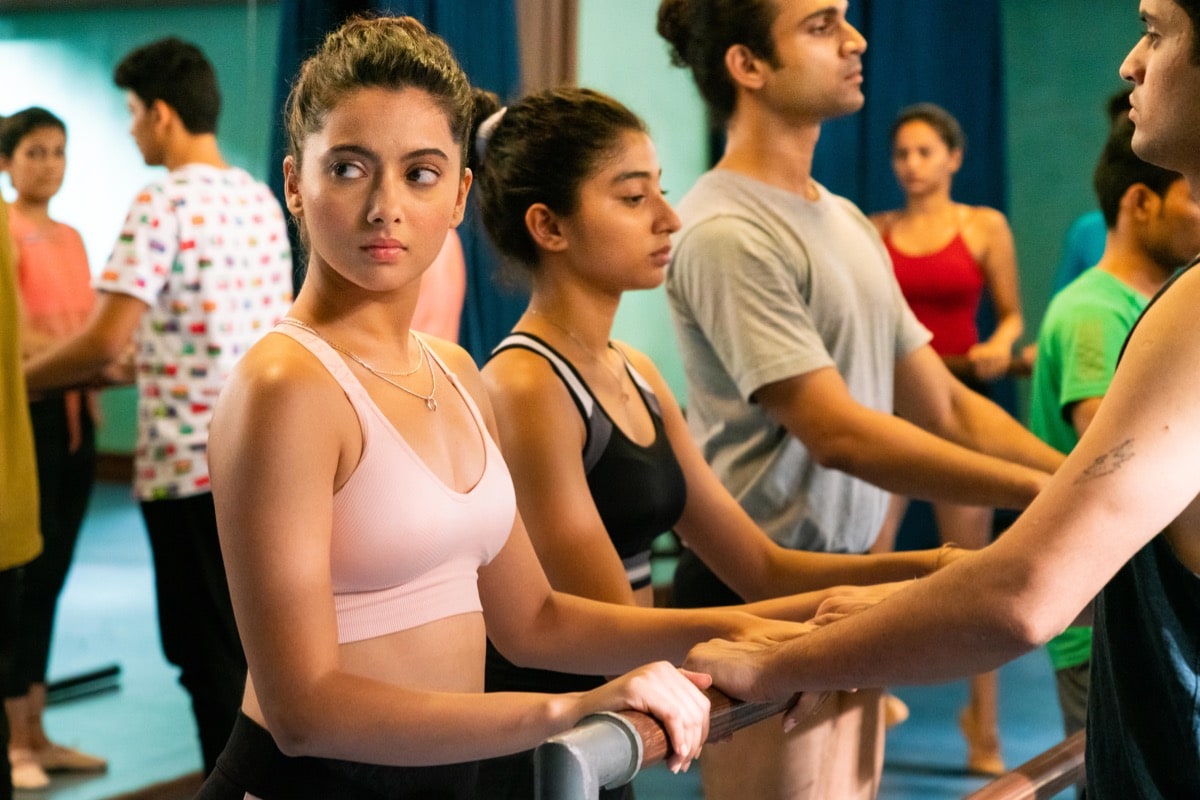 For what it’s worth, it’s good to see a film that’s aware of its socio-political realities. Through Asif and Nishu’s respective friendships, involving fellow breakdancer Asha (Mekhola Bose) and ballet rich-kid Neena (Sasha Shetty), Yeh Ballet engages with the class divide that permeates Mumbai. But its messaging isn’t always organically woven in. Unlike her past scripts, Taraporevala fails to probe religious and class strife in any detail, and she doesn’t have anything to say that you haven’t heard a thousand times before. Instead, the Netflix film does much better with its tiny, quiet moments, be it Asif practising ballet while standing in the daily line at the slums to get water, Nishu simultaneously practicing and cleaning the ballet studio, or Asif praying at a temple, because the girl he likes is Hindu.

That’s also true of Yeh Ballet’s evocative opening shot, which begins high above Mumbai with the Bandra–Worli Sea Link in view, before spinning around to reveal one of the city’s many slums. In a few wordless seconds, the fancy Rs. 16 billion bridge — a beacon of how the needs of the few are prioritised over the many — turns into a symbol of upper classes avoiding the lower counterparts, in this case, by literally flying around them. Sadly, these touches and that patience is missing from the rest of Taraporevala’s work on Yeh Ballet, which doesn’t know when to stress on something or let the characters breathe, how to craft scenes to engineer the right emotion and infuse them with the importance they deserve, or even properly stage and link scenes into one another.

Taraporevala also inserts several Bollywood-style musical numbers into Yeh Ballet, which is strange because a made-for-Netflix film doesn’t have any commercial concerns to adhere to, unlike theatrical releases. Like the aforementioned pop song that plays over Asif and Nishu’s big ballet performance, it — in addition to the writing, direction, and cinematography — all stems from a limited imagination and further dilutes the film of its potential. Having not helmed a feature project in 12 years, Yeh Ballet is a rusty return for Taraporevala. And that’s a shame given the young actors, many of whom are first timers, do a good job with what they have to work with. Especially Chauhan, who’s gone from being a taxi driver’s son to a ballet dancer — and now, an actor. It’s a story that deserved more.

Yeh Ballet is out Friday on Netflix worldwide.

Coronavirus has taken over the globe and every country has been trying to do its ...